This month's Resolverite Spotlight is Brittany Lamorie! Resolver's Talent Specialist, Victoria Pearson sat down with Brittany, a Product Owner based in our Edmonton office to learn more about her role and what her day-to-day is like at Resolver. 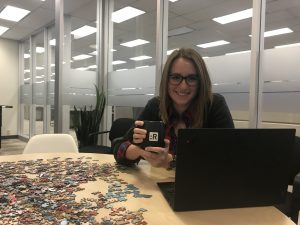 Victoria: Let’s start off with your journey. What did you go to school for, and how did it lead you to Resolver?

Brittany: I went to school at the University of Alberta where I took Computer Engineering with a Nanoscale Systems Design option.

Brittany: It is. You can’t really do much with it as an undergrad, but if you take that option, you get a taste of it, and then if you want to do more with it, you can do your masters or PhD…to which I said, “no thank you!” [laughs].

Victoria: It would seem like a lot of commitment!

Brittany: Yes, it’s a lot of schooling. And [Nanoscale Systems Design] is interesting, but it’s also a lot of physics and math. So, I took computer engineering in school and I was pretty heavily involved with a bunch of different student groups. Mostly our Computer Engineering Discipline Club which aimed to run events for students of that faculty; alumni panels, mixers, and conferences. Through that club, we started what is now one of the biggest hackathons in Alberta, HackED, which is still going strong. I really enjoyed the planning aspect of my involvement there and in the technology community. I met a lot of people through that. Some of which were already doing product management, some were community managers, some were developers. I got to meet a lot of people in and around Edmonton that way. That’s how I figured out that development probably wasn’t going to be my end goal. Thanks to that group, I was able to map out the direction that I wanted my career to move toward.

Victoria: After you finished school you went into development. Did you go into it thinking that you would eventually want to transition into a product role?

Brittany: I went into development knowing that I knew it wasn’t going to be my end goal, but that it was something I wanted to do more of. Obviously when you’re working in tech, having a strong technical background is important. I wanted to get that experience, but I wasn’t sure how long I was going to be in that role, or how in-depth I would go, or even if I was going to completely change direction. I came into it very open. 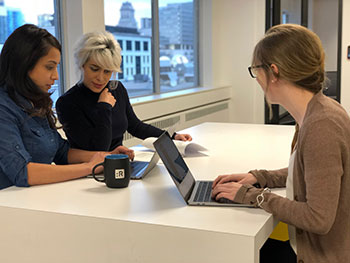 Check out the amazing opportunities at Resolver.

Victoria: So now that you’ve moved into a product role, how did starting as a developer at Resolver prepare you for your current role?

Brittany: I’ve only been in this role for two months. It’s still pretty new. Being in development helped me to really understand the technical side; knowing how the software works, how it’s built, the architecture and the idea behind it. Having a technical mindset means that I’m probably overthinking certain things, which I’m sure some people don’t appreciate as much as others [laughs]. But it means that I can keep in mind the things that other people wouldn’t necessarily think of right away.

Victoria: So, two months in! What is your day-to-day like? What are you currently working on?

Brittany: We’re currently planning the integration of our new platform with our existing products, which my main focus right now. There are more in-person meetings, planning and brainstorming sessions for this role which is a lot of fun. A part of it is also requirements gathering, story writing, and that sort of thing. This role involves much more communication, planning, and teamwork. There are many opportunities to be pulled away from something that you’re currently working on to move quickly to something else. No day is the same!

Victoria: Do you feel like the process is a lot of brainstorming - to trial and error?

Brittany: The cycle is brainstorming and then brainstorming with other groups to figure out what works best for everyone; bringing everyone together to make sure that our ideas are technically feasible and if the testing for it will be months of work or less. It’s looking at the big picture of everything – it’s a lot of fun!

Victoria: Again, you’re only two months into this new role, so to ask what your biggest challenge is in your role might be a bit more skewed because you’re still trying to get up to speed! But in trying to do that, what’s been the most difficult thing for you in making the transition from development to a role on the product team?

Brittany: I think there’s a challenge in learning all the other parts of the apps that I didn’t have much exposure to before. In development, you focus on working on one thing, and you end up really understanding that one thing. But then you don’t have full exposure to the other parts that make the solution work. I’m still learning! It’s a change of mindset, and I have to find that new balance.

Victoria: What do you love the most about being a Product Owner?

Brittany: I really like the communication part of it. Talking to people and strategic “big picture” planning is a lot of fun. I enjoy having the opportunity to sit in on some demos, talk to customers, get feedback from customers. I haven’t done a lot of that yet, but I’m hoping that it's something in the future that we can go forward with. I have a lot of ideas and I look forward to hopefully getting those implemented at some point!

Victoria: What would be your advice to someone that wants to make a similar transition? Not necessarily from development to product, but in general; transitioning onto a different career path.

Brittany: It wasn’t instantaneous for me. I got the opportunity to taste-test what it was like to be a Product Owner about a year ago. I was lucky in that I had the time to figure it out for myself and I enjoyed it a lot. I would say that if there is an opportunity to job-shadow someone who works in a role that you’re interested in, that would work to solidify your feelings that a change is right for you. It might also provide you the opportunity to jump into different things and get a bit of experience first. But if you know that it’s what you want to do, just do it!

Victoria: You made a big space for yourself in tech. What would your advice be to someone who wanted to get started in the industry?

Brittany: I think it depends on what their background is and what their area of interest is in tech. But my advice would really be to get involved in the tech community in your area. And then find a company that fits what you want to do and has the same values as you. I honestly think that the culture fit in tech is almost more important than the tech itself. For me at least, when I was in development it was all about problem-solving. It didn’t really matter what language I was writing or the tech stack we were using. For me, it’s very important to enjoy the people I’m around, and the culture of the organization.

Victoria: What did you want to be when you were growing up?

Victoria: My last question: what do you do for fun?

Brittany: I volunteer a lot. I’m a mentor at Canada Learning Code, and I help out there as much as I can. I’ve also been involved in a bunch of different meetups in Edmonton. I’m heavily involved in the Edmonton tech community. I also volunteer at the University of Alberta. I’m actually already booked in to talk at the University’s open house about the value of being involved in your community as an engineer.

Thanks for sharing, Brittany! If you liked getting the inside scoop on what it’s like to work at Resolver, be sure to come back next month for our next spotlight.

Blog Array Best Practices for Building an Audit Plan Read More
Blog Array Three Causes of Business Interruption Every Company Should Be Aware Of Read More
Blog Array How To Choose An Incident Management System Read More
More Resources
`
We use cookies on our website to give you the most relevant experience by remembering your preferences and repeat visits. By clicking “Accept”, you consent to the use of ALL the cookies. Do not sell my personal information
Cookie SettingsAcceptReject All
Manage consent