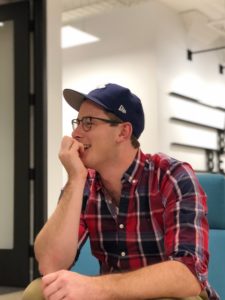 This month’s Resolverite Spotlight is Riley Tighe! Resolver’s Talent Specialist, Victoria Pearson sat down with Riley to learn more about his role and what his day-to-day is like at Resolver.

Victoria: If you could start by telling me a bit about your time here at Resolver that would be great!

Riley: It’s kind of a funny story actually. I initially went to school for kinesiology and I didn’t like it at all. I dropped out three years into my program, and did a carpentry apprenticeship for about a year. After that year, I decided to return to Queens where I met Amanda [Application Manager at Resolver] who actually grew up with my cousin! At the time, I was bartending and my cousin invited me out with some friends. It turned out that a bunch of Resolverites were there, and they happened to be looking for a Solutions Consultant and told me to apply!

Victoria: I’m curious how you became a Solution Consultant, because at that point it seems like you were diving into something you didn’t know much about at the time.

Riley: It was really nice because a lot of people from Resolver agreed to meet with me beforehand to tell me about Resolver and what the culture was like. I had never really thought about working in software before, so they took time to explain what I would be getting myself into and what Resolver was all about. I went through quite a few interviews because you’re right – I didn’t have the background. And as soon as I started, I fell in love.

Victoria: So you became a Solution Consultant, and now you’re a Solutions Engineer. Can you tell me a bit about how you made that happen?

Riley: Yeah! I was on the services team for 8 or 9 months [as a Solution Consultant] and I really loved it. But I also tried almost as soon as I started to branch out and learn more. I worked with a lot of groups trying to get into a bunch of smaller projects off the side of my desk. Then Kevin [head of the Solutions Engineering department] asked me if I’d be interested in moving to a different role.

Victoria: If I recall, to get the role you had to perform a mock-demo?

Riley: Yes, and I was so nervous because you’re never going to be in a room with people that know more about the process and the software. I went in to the presentation and treated it like I didn’t know anyone. I even went in giving out my card and some pamphlets [laughs]. I was doing this presentation in front of pretty much the entire executive suite.

Victoria: You’ve been in that role for about a year and a half now – what does a typical day look like?

Riley: It really varies. Our team is meant to be the focal point for any new sales coming through. We routinely get meeting invitations when new sales opportunities come in for us to go in and talk about who is the company, understand what are the prospect is looking for, and determine if Resolver is the solution to do that. We go in and we qualify it; are we talking to the right group? Will our solution be right for them? Once we sort that out, we go through and do everything from profiling who’s coming into trying to figure out what they’re actually looking for from the platform.

Victoria: How much time does it take for you to prepare for a demo?

Riley: It could be anywhere from 2 hours to 2 days. It depends on the client, but if it’s a really good fit and the company is larger, I can spend around 20+ hours preparing for a demo.

Victoria: What do you enjoy most about what you do?

Riley: It’s just really exciting to me. It’s really fast-paced and no two days look the same. We get to demo to a lot of really cool groups with very interesting stories.

Riley: I do a lot of hiking, reading and hanging out with friends. Truthfully, I usually end up going out to a pub after a hard day with people from work. That’s a nice de-stressor for me. I also get to travel quite a bit so it’s nice to be able to get a bit of variety into the day to day.

Victoria: What’s the best place you’ve traveled so far during you time here?

Riley: Australia. And I also got to go to New Zealand in April for a month. I almost didn’t come back!

Victoria: What’s next for you at Resolver?

Riley: Resolver has given me an abundance of opportunity. It’s been really nice because every time I come up with an idea that I want to try, they really just let me try. Which has what lead me down different paths here. I do want to gain more domain knowledge. I’d like to deep-dive into one specific area of our product.

Victoria: What would your advice be to someone interested in a career at Resolver?

Riley: Do it! It’s awesome. If you have the right attitude, your ideas will be taken seriously, and you’ll have that opportunity to try new things. I really struggled with all the “white space” and opportunity at the beginning because I was scared to make mistakes. If I could offer any advice though, it would be to make that mark as soon as possible – try things and if you make a mistake, learn from it and move on.

Victoria: Alright – now comes the signature question: what did you want to be when you grew up?

Riley: I had three ideas. At one point – an Astronaut. Then I wanted to be in the circus as an Acrobat/Juggler. And then the last one was a Doctor. So, when I took kinesiology, I was trying to go for that last one. But realistically the Acrobat/Juggler is what I do now [laughs].

Update: Shortly following Riley’s interview for the Resolverite Spotlight, he was promoted to our Product team as an Application Manager and will be transitioning his role within the coming months! Congratulations, Riley! Resolver is looking forward to seeing what else you will accomplish in your new role.

Thanks for sharing, Riley! If you liked getting the inside scoop on what it’s like to work at Resolver, be sure to come back regularly for our next spotlight.

Blog Array Risk Management Framework for Hedge Funds Read More
Blog Array The Importance of a Vendor Risk Assessment Read More
Blog Array Defining Investigation Management Read More
More Resources
We use cookies on our website to give you the most relevant experience by remembering your preferences and repeat visits. By clicking “Accept”, you consent to the use of ALL the cookies. Do not sell my personal information
Cookie SettingsAcceptReject All
Manage consent